Actual data from 38 states showed more than 167,000 children wed in that decade. The other 12 states and Washington, D.C., could not provide the data. An overwhelming majority of the children married were girls.

Children can easily be forced to marry or to stay in a marriage before they turn 18, because they have limited legal rights. Further, marriage before 18 produces such devastating, lifelong repercussions for girls that the U.S. State Department has called it a “human rights abuse.”

Do you know how many children were married in your state between 2000 and 2010? How young were they? Or is your state one of those that do not even track that data?

Many states gave an age range for the youngest children married, such as “14 or younger.” Just how much younger were the child brides and grooms? 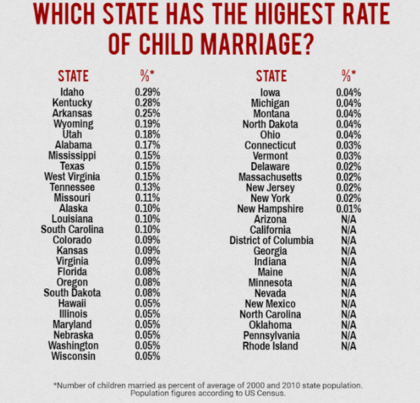 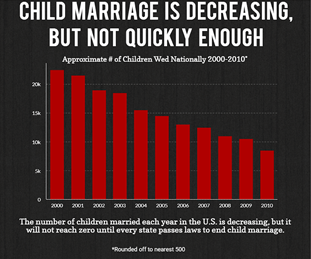 Effect of Covid-19 on Child Marriage around the World

The pandemic is increasing poverty – forcing girls out of school and into work or marriage, the charity Save the Children has warned.

An estimated 500,000 more girls worldwide risk being forced into child marriage and as many as one million more are expected to become pregnant in 2020 as a result of the economic impacts of the COVID-19 pandemic, new analysis from Save the Children reveals—a year-over-year increase of four and three per cent, respectively.

The increase comes on top of the previous estimated rates of child marriage, which already anticipated 12 million girls around the world being forced into marriage this year. While this increase represents a conservative estimate, it marks a significant surge in child marriage rates with an expected spike in teenage pregnancies and school dropouts to follow. The increase is set to reverse 25 years of progress, which saw child marriage rates decline.

In its new report “Global Girlhood 2020: COVID-19 and progress in peril,” Save the Children analyzed the impact of COVID-19 on gender equality, revealing its devastating effects.

Immigration and Child Marriage in the U.S.

The phenomenon occurs in the U.S. as well. Thousands of requests by men to bring in child and adolescent brides to live in the United States were approved over the past decade, according to government data obtained by The Associated Press (January 2019). In one case, a 49-year-old man applied for admission for a 15-year-old girl.

The approvals are legal: The Immigration and Nationality Act does not set minimum age requirements for the person making the request or for that person’s spouse or fiancée. By contrast, to bring in a parent from overseas, a petitioner has to be at least 21 years old.

The data raises questions about whether the U.S. immigration system may be enabling forced marriage and about how U.S. laws may be compounding the problem despite efforts to limit child and forced marriage.

Is “Arranged” different from “Forced?”

However, there is a fine line between consent and coercion. Even when a marriage is labeled “arranged” and the bride and groom get the option to say no, they might face intense pressure from their families and society not to do so, or they might be too young and inexperienced to make such a life-altering decision. They might be rushed to give an answer, before they can fully think through their options. They might be bribed or tricked. They might be grappling with implicit and/or explicit threats about the harms that will befall them and their families if they do not agree to a marriage. They might be subjected to actual violence: locked up, beaten or shunned until they say yes.

However, Unchained, which was founded and is led by arranged/forced marriage survivors, understands the dangerous message such a dichotomy might send to women, girls and others who are pressured, bribed or tricked into marriage but do not face explicit threats or endure actual violence. Such individuals need to know what is happening to them is not “benign,” and they deserve and can get help.

Few studies have been done about arranged/forced marriage in the U.S., so exact statistics are unknown. A 2011 survey by the Tahirih Justice Center found 3,000 known or suspected cases in the previous two years alone of girls in the U.S. as young as 15 who were forced to marry under threats of death, beatings or ostracism.

Why do women need help?

A woman or girl who tries to resist an arranged/forced marriage often risks ostracism and honor violence.

And a woman or girl who tries to get divorced after an arranged/forced marriage has happened usually faces serious obstacles. Typically, she is stymied by religious laws and social customs that make divorce difficult, especially for women. Often, she is shunned by her family and friends, who view divorce as shameful. If she was brought to the U.S. as part of an arranged/forced marriage, she might be constrained, as well, by her own immigration status.

Are men affected too?

Arranged/forced marriage affects boys and men too. However, women and girls are more likely than men and boys to be coerced into marriage, and they face additional, significant challenges — in the form of religious laws and social customs — when trying to resist or leave it.

For example, a woman in the Orthodox Jewish community does not have the legal right to divorce her husband; only men have the right to grant a divorce under Orthodox Jewish law. Further, most communities that practice arranged/forced marriage view divorce as shameful, and they tend to place the burden largely on women to avoid that shame and keep a marriage intact, even when that means women must sacrifice their safety or happiness.

What can we do?

Education plays a critical role in keeping girls safe from child marriage. In fact, the longer a girl stays in school, the less likely she is to be married before age 18 and have children during her teenage years.

In addition, education ensures girls acquire the skills and knowledge to find employment and a means to support their families. This can help break the cycle of poverty and prevent child marriages that occur as a result of extreme poverty and/or financial gain.

Every girl has the right to decide her own future, but not every girl knows this – that’s why empowering girls is so crucial to ending child marriage.

When girls are confident in their abilities, armed with knowledge of their rights and supported by peer groups of other empowered girls, they are able to stand up and say “NO” to injustices like child marriage.

Empowered girls are able to re-shape perspectives and challenge conventional norms of what it means to be a girl.

Rally the wider community to stand up for girl’s rights

Parents and community leaders are often responsible for deciding when and whom a girl marries. In many traditional communities, it’s believed that marriage keeps girls safe, protected and economically provided for by their husbands.

When parents and community leaders are educated about the many negative consequences of child marriage, it can inspire them to change their views, speak up for girls’ rights and encourage others to do the same.

Álida, Rosy, Mayra and their friends were part of a successful Plan International campaign to raise the minimum age for marriage in Guatemala to 18 years. Together, they spread awareness, rallied their communities and petitioned lawmakers.

Provide girls and their families with income opportunities

Providing families with livelihood opportunities like microfinance loans is an effective way to prevent child marriages that occur as a result of financial need.

When families have increased economic opportunities, they’re less likely to perceive their daughters as economic burdens. This is especially true if a girl is in school gaining valuable skills that will help generate income in the future.

In countries where child marriage is prevalent, petitioning government to increase the minimum age for marriage to 18 years is a critical first step for positive change.

Once the minimum age is increased, it’s imperative to continue raising awareness of these laws among government officials and community leaders to ensure the laws are being enforced.

Other legal policies, such as registering birth certificates and marriages, are powerful tools for preventing child marriage. 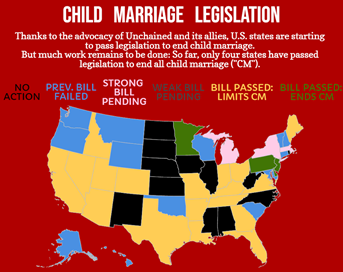 In Washington state, you must be at least 17 to get married — 18 to marry without parental consent — but minors under the age of 17 may obtain a license after petitioning the court in “special circumstances.” While the statute does not list these special circumstances, typically they include pregnancy or childbirth.

Eliminate VISA loopholes that allow child marriage in the U.S.

Federal bills S.742/HR1738 would eliminate major visa loopholes that have allowed thousands of minors to be subjected to child marriages through our immigration system.

Contact your federal lawmakers in both the U.S. House of Representatives and Senate and urge them to support these bills. Visit this link to take action: