From the Field Director of Yes on 1631, the initiative for clean energy and jobs: 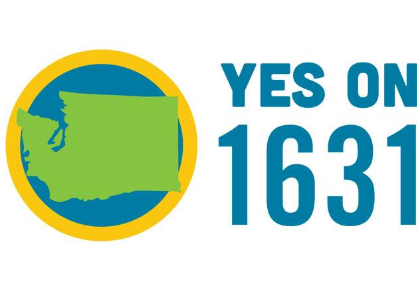 We always knew this election was going to be close. All indications say every vote is going to matter.

Now that we’ve been inundated by Oil Industry ads for months many of you are having near constant conversations with your friends, family and colleagues about I-1631.

I’ve put together some tools and facts that I think you’ll find helpful in this email. We’ve also put together 1631Facts.org to respond to these lies.

Remember the #1 thing that moves voters is reminding them that our coalition involves groups like the American Lung Associaton and Nature Conservancy who care about reducing pollution, whereas our opponents are multinational oil companies spending $25 Million to avoid accountability for their pollution.

“The Seattle Times ed board does not believe that Washington can be a leader on tackling the problem of climate pollution. We believe that Washington can and must be a leader on this issue. I-1631 is a smart, practical first step to addressing pollution, written by the largest and most diverse coalition in state history. I-1631 is endorsed by over 400 organizations, and by papers including The Olympian, The Tacoma News Tribune, The Everett Herald, The Lewiston Tribune and the Stranger. We are confident that voters agree it’s time for Washington to lead.”

Hot Tip: Send your friends and family the Olympian’s excellent endorsement of I-1631.

2. Responding to Cliff Mass’s weather blog
Local blogger Cliff Mass has allied himself firmly with the oil industry against I-1631. Cliff’s criticism of I-1631 is unfounded and seems largely based in bitterness from 2016’s debate over I-732. There are two great responses to friends and family concerned about his opposition.

First, nearly every one of Cliff’s colleagues at the UW, as well as Nobel Prize Winners and UN IPCC Authors from Washington have signed an open letter supporting I-1631. Remind your friends and family that Cliff is FAR outside of the consensus of the scientific community and speaking about matters FAR outside his expertise.

Second, his old allies at CarbonWA have written a point by point rebuttal to his spurious claims. and reiterated their support for I-1631.

3. The Biggest Polluters in the world are fighting I-1631 because they ARE NOT exempt
It’s somewhat ironic that the Fossil Fuel companies responsible for about 71% of the world’s climate pollution are trying to point fingers to avoid accountability. I-1631 is a smart, balanced policy about reducing pollution, but $25 Million of ads talking about “exemptions” have planted doubts with some voters. When responding to this spurious argument be sure to point out:

– I-1631 was written by groups that care about reducing pollution like the American Lung Association and the Nature Conservancy. The biggest polluters in the state, and in the world are spending record amounts ($25.8 Million) to lie to voters about I-1631 because they don’t want to be held accountable for their pollution. They certainly are not exempt.

– I-1631 covers 80% of Washington’s Climate Pollution and ENSURES that Washinton’s only coal plant will stop burning coal by 2025.

– I-1631 is a smart plan that ensures that when we need steel, aluminum, and concrete to build new clean energy we are using Washington companies and Washington workers to do it. That means we are allowing more people in Washington to share in the clean energy economy.

4. No On 1631 Commissioned a study by the same firm the Tobacco companies used to cast doubt on the health impacts of smoking.
No on 1631 is sending out millions of mailers citing a “NERA Institute” study they paid for. The NERA Institute gained infamy when the Tobacco industry paid them to put together reports downplaying the health impacts of smoking. They have also gone on record saying that sometimes the air can be “too clean for optimal health”.

NERA is a discredited, unreputable firm that cannot be trusted. The NO Campaign’s other ally “The Washington Policy Center” is a right-wing think tank funded by the Koch Brothers. The Koch Brothers have contributed $550,000 to the NO campaign so far.

5. I-1631 has strong accountability mechanisms.
The No campaign tries to scaremonger by saying that an “unelected board” will be spending I-1631’s revenue with no oversight. That’s a direct lie.

The Washington Constitution gives the exclusive power of the purse to the legislature. I-1631 sets up a board of experts and community leaders appointed by the Governor who will evaluate proposals and put together recommendations for the legislature to vote on. The board will work with the Departments of Commerce and Ecology to regularly conduct public evaluations on the effectiveness of the program.

Experts and community leaders making recommendations to our elected representatives and evaluating their progress? That’s reasonable good governance. Good governance groups like the League of Women Voters and the Washington Budget and Policy Center, as well as our Attorney General Bob Ferguson have proudly endorsed I-1631.

The Union of Concerned Scientists has a good explainer on this and other arguments here.

The campaign’s communications team put together this great FAQ that’s on every canvasser’s clipboard. Check it out here.

Puget Sound Sage does a great job breaking down exactly how I-1631 works in this blog post.